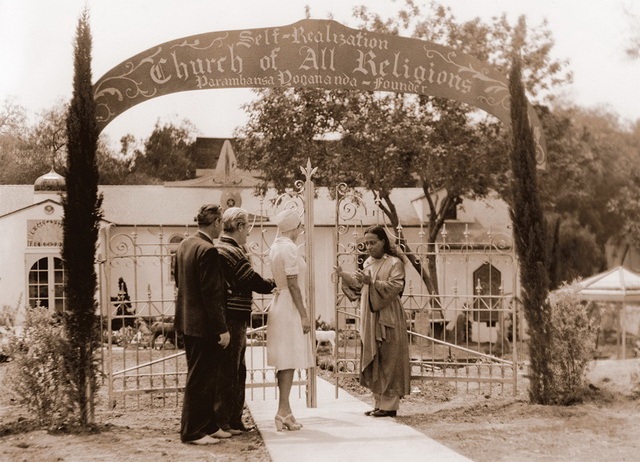 In December, 2020, we posted on our Blog a special message from Self-Realization Fellowship/Yogoda Satsanga Society of India President Brother Chidananda about the Voluntary League of Lay Disciples. In that post, he expanded on his announcement (at the 2020 Convocation) of the upcoming launch of this “major milestone in the development of Paramahansa Yogananda’s worldwide mission.”

Plans are still underway for launching a full website for the Voluntary League of Lay Disciples later this spring, and at that time we will be ready to start accepting applications to join. In the meantime, Brother Chidananda is continuing the process of introducing the lay disciple league through a second post in this blog, to share with you some of the inspiring history of how the Voluntary League of Lay Disciples has come into being.

Brief History of Discipleship in SRF/YSS

Since the purpose of the Voluntary League of Lay Disciples is to provide a vehicle for the development of disciples whose desire is to follow their guru, Paramahansa Yogananda, as fully as possible, a short overview of what it means to be a disciple in Self-Realization Fellowship/Yogoda Satsanga Society of India may be helpful here.

As is well known to SRF/YSS members, the worldwide spiritual dispensation assigned to Paramahansa Yogananda was set in motion by Jesus Christ and Mahavatar Babaji together.[1] The divine direction of both of these great avatars is reflected in the sacred path of discipleship that Paramahansaji offered to his own deeply devoted followers.

In the New Testament Gospels we find many powerful insights into discipleship as expressed in the lives of followers of Jesus. Paramahansaji tells us: “The great ones come with two purposes: to inspire and enlighten a certain number or a large mass of people; and to train real disciples, those who pattern their lives after the master’s. The latter are the members of the saint’s true ‘family,’ constituting an inner group in whom he plants his spiritual life. Jesus had twelve such disciples — and others too — but one of the twelve betrayed his love and trust. The most difficult task for every God-ordained spiritual teacher is to produce others like himself, but Jesus made genuinely Christlike disciples.”

A disciple is one who accepts the discipline of a guru to attain spiritual perfection, and who follows in the guru’s footsteps, striving daily to become a living example of his teachings and his ideals. This requires a spirit of enthusiasm and dedication, qualities required of all disciples, whether they follow the path of the monastic or that of the householder. God has no favorites. He chooses those who choose Him.

The criterion for discipleship is whether one follows, whether one is loyal to the teaching of one’s guru. Out of the multitudes that heard the teachings of Jesus, only a comparatively small group actually followed him. It was this failure of the multitudes to follow, and hence to receive the benefits of his teachings, that prompted Jesus to ask, “Why call ye me, ‘Lord, Lord,’ and do not the things which I say?” (Luke 6:46).

According to Paramahansaji, Jesus expressed a similar sentiment in our modern era. Though the inner truth — the living spirit — of his message of God-communion had been kept alive for 2,000 years by selfless devotees in monasteries and convents, our Guru said, producing many saints of true, Christlike Self-realization — St. Anthony, St. Francis of Assisi, St. Teresa of Avila, and others — Jesus was not happy about the outer structure of “churchianity” that had grown up around his name and teachings. Paramahansaji wrote: “Resurrected, ever-living Jesus conferred with Mahavatar Babaji in India, lamenting, ‘What has happened to my churches? They are doing good works, but they have lost the knowledge of real communion—actual contact with God—and they don’t know how to perceive my consciousness and transmit it to others.’”

Paramahansaji went on to explain: “Through the science of Kriya Yoga sent by Mahavatar Babaji in communion with Jesus Christ, Self-Realization Fellowship in the modern age is teaching the common universal truth underlying the original Christianity of Christ and the original Yoga of Krishna.”

The inauguration of the Kriya Yoga movement in modern times included another momentous milestone in our understanding of the guru-disciple relationship as practiced in SRF/YSS. In Autobiography of a Yogi, chapter 34, Paramahansaji recorded the words of Babaji and Lahiri Mahasaya on this subject.

Lahiri Mahasaya related: “Babaji instructed me in the ancient rigid rules that govern the transmission of the yogic art from guru to disciple. ‘Bestow the Kriya key only on qualified chelas,’ Babaji said. ‘He who vows to sacrifice all in the quest of the Divine is fit to unravel the final mysteries of life through the science of meditation.’

“‘Angelic Guru, as you have already favored mankind by resurrecting the lost Kriya art, will you not increase that benefit by relaxing the strict requirements for discipleship?’ I gazed beseechingly at Babaji. ‘I pray that you permit me to communicate Kriya to all sincere seekers, even though at first they may not be able to vow themselves to complete inner renunciation. The tortured men and women of the world, pursued by the threefold suffering,[2] need special encouragement. They may never attempt the road to freedom if Kriya initiation be withheld from them.’

“‘Be it so. The divine wish has been expressed through you. Give Kriya to all who humbly ask you for help,’ the merciful guru replied.”

In a talk to disciples at SRF Headquarters in 1949, Paramahansa Yogananda explained this incident as follows: “For ages, Kriya Yoga had been hidden from the general public, to insure that the ancient holy science would be known only to “qualified chelas” — monks and other renunciants, mostly Brahmins, whose whole life was dedicated solely to God-realization. Although the ancient restrictions of asceticism and renunciation were waived by Babaji in order that the masses might benefit from Kriya Yoga, he nevertheless required of Lahiri Mahasaya and all descendants of his spiritual line (the SRF/YSS line of Gurus) that they impose on any who sought initiation a period of preliminary spiritual training, by way of preparation for Kriya Yoga practice.”

As is well-known, it was in 1920 that Mahavatar Babaji visited Paramahansa Yogananda and blessed him to journey to America — and from there to spread the teachings of Kriya Yoga worldwide, saying: “Kriya Yoga, the scientific technique of God-realization, will ultimately spread in all lands, and aid in harmonizing the nations through man’s personal, transcendental perception of the Infinite Father.”

History of Lay Discipleship in SRF/YSS

In the earliest years of his work in America, Paramahansaji personally approved every individual who received the sacred Kriya Yoga initiation, by which one enters into the guru-disciple relationship.

In 1951–52, knowing that his physical incarnation was coming to a close, he conveyed to his close disciples the rules that were to be followed for bestowing Kriya Yoga initiation from that time onward. Though the SRF Lessons and basic techniques would remain available to anyone who wanted to receive them, of whatever church or spiritual path or none, Kriya initiation was to be bestowed only on those who would become members of SRF or YSS, and who would formally accept the guru-disciple relationship.

Those guidelines have been observed by SRF and YSS ever since, resulting in the continuously growing spiritual family of lay disciples all around the world that we rejoice in today.

In his final years, Paramahansaji sometimes referred to those who had received Kriya Yoga initiation through his instrumentality as “disciples of the order.”[3] In other words, he thought of all SRF/YSS devotees who had taken the Kriya Pledge as belonging to an order of discipleship, not just those who took vows in the monastic order. In addition, the guru spent much time in his final years working to establish a plan and structure for lay disciples who wished to play a part in serving the work. He set forth the plan of life for disciples, now given in Kriya Lesson 5, which included various ways in which the disciple could actively serve the Guru’s work and mission.

He asked Meera Mata to begin organizing the members at the Hollywood Temple into the first SRF Lay Disciple Group. Meera Mata worked with key lay disciples to establish the pattern for the entire lay disciple movement in SRF. Eugene and Marjorie Benvau were the first lay leaders of the group; and other devoted members have continued in leadership roles over the years to the present time.

In the 1970s, Brother Bhaktananda joined Meera Mata in the guidance of this group, conducting monthly Lay Disciple meetings and discipleship classes in India Hall. The program has been continued under the ministers who succeeded Brother Bhaktananda as minister-in-charge at Hollywood.

In a letter written to devotees in 1962, Meera Mata said:

“The Lay Disciple Group at the Hollywood Church of SRF is the beginning of an Order that was a beloved dream of our Master, Paramahansa Yogananda. This group is composed of SRF members who wish to become more active in the work of SRF and to further its growth in whatever way they can.”

In 2019, the release of the new edition of the SRF Lessons provided for all followers of Paramahansaji a comprehensive plan of life for real discipleship. SRF president Brother Chidananda then announced the formal inauguration of the Voluntary League of Lay Disciples, which has been in development since then and will be open for membership in the spring of this year.

Our annual Convocation — by far the largest and most complex event held by SRF each year — is joyously planned and staffed by hundreds of devotee volunteers. This photo shows volunteers serving lunch to devotees on pilgrimage to the SRF Mother Center during a Convocation several years ago.

We look forward to sharing more about the upcoming launch of the SRF Voluntary League of Lay Disciples (the YSS Sevak League) in the near future.

[1] This is explained in Autobiography of a Yogi, chapters 33–37; as well as in Self-Realization magazine, Spring 2020 issue.

[2] Physical, mental, and spiritual suffering; manifested, respectively, in disease, in psychological inadequacies or “complexes,” and in soul ignorance.

[3] “I never say that others are my disciples,” he said. “God is the Guru; they are His disciples.”

Paramahansa Yogananda on Fulfilling Your Aspirations in the New Year