One of Paramahansa Yogananda's life-long missions was to promote the one Reality behind all the world's true religions, and to provide truth seekers of both East and West with the universal science of God-realization—the means to awaken a deeper awareness of the innate divinity latent in every human being.

Among the ways in which Paramahansaji promoted the unity of the world's religions was through his lectures and writings. In these, he has revealed the hidden metaphysical truths of the great scriptures of East and West, and has shown how these sacred texts lead the seeker along the same universal path to oneness with God.

On these pages we will be sharing with you excerpts from Yogananda's highly acclaimed interpretations of the four Gospels of the New Testament, India's Bhagavad Gita, and The Rubaiyat of Omar Khayyam. (Though not considered a "scripture" per se, the Rubaiyat is a beloved work of mystical poetry exemplifying the hidden divine truths taught by the Sufis within the Islamic tradition.)

We invite you to return to this section as we continue to add more material here from the writings of Paramahansa Yogananda.

Paramahansa Yogananda from his Second Coming of Christ: The Resurrection of the Christ Within You

"Jesus went very deep in teachings that appear on the surface to be simple—much deeper than most people understand…In [his teachings] is the whole science of yoga, the transcendental way of divine union through meditation."

Read more excerpts from Yogananda's commentaries on The Gospels.

Paramahansa Yogananda from his God Talks With Arjuna: The Bhagavad Gita

"The entire knowledge of the cosmos is packed into the Gita. Supremely profound yet couched in revelatory language... the Gita has been understood and applied on all levels of human endeavor and spiritual striving….Wherever one is on the way back to God, the Gita will shed its light on that segment of the journey." 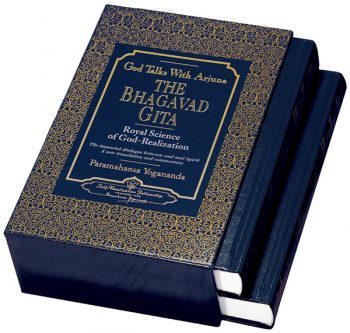 Read more excerpts from Yogananda's commentaries on The Bhagavad Gita.

Paramahansa Yogananda from his Wine of the Mystic

"As I worked on the spiritual interpretation of the Rubaiyat, it took me into an endless labyrinth of truth, until I was rapturously lost in wonderment. The veiling of Khayyam's metaphysical and practical philosophy in these verses reminds me of 'The Revelation of St. John the Divine.'"

Read more excerpts from Yogananada's spiritual interpretation of The Rubaiyat of Omar Khayyam.

From Paramahansa Yogananda's introduction to The Holy Science, a profound work by his guru on the underlying unity of Christian and Hindu Scriptures.

"Prophets of all lands and ages have succeeded in their God-quest. Entering a state of true illumination, nirbikalpa samadhi, these saints have realized the Supreme Reality behind all names and forms. Their wisdom and spiritual counsel have become the scriptures of the world. These, although outwardly differing by reason of the variegated cloaks of words, are all expressions — some open and clear, others hidden or symbolic — of the same basic truths of Spirit.

"My gurudeva, Jnanavatar Swami Sri Yukteswar (1855–1936) of Serampore, was eminently fitted to discern the underlying unity between the scriptures of Christianity and of Sanatan Dharma. Placing the holy texts on the spotless table of his mind, he was able to dissect them with the scalpel of intuitive reasoning, and to separate interpolations and wrong interpretations of scholars from the truths as originally given by the prophets."

Read Next: The Hidden Truths in the Gospels