Excerpts from Paramahansa Yogananda’s two-volume commentary on the New Testament: The Second Coming of Christ: The Resurrection of the Christ Within You

In these pages I offer to the world an intuitionally perceived spiritual interpretation of the words spoken by Jesus, truths received through actual communion with Christ Consciousness.… They reveal the perfect unity that exists among the revelations of the Christian Bible, the Bhagavad Gita of India, and all other time-tested true scriptures.

The saviors of the world do not come to foster inimical doctrinal divisions; their teachings should not be used toward that end. It is something of a misnomer even to refer to the New Testament as the “Christian” Bible, for it does not belong exclusively to any one sect. Truth is meant for the blessing and upliftment of the entire human race. As the Christ Consciousness is universal, so does Jesus Christ belong to all….

In titling this work The Second Coming of Christ, I am not referring to a literal return of Jesus to earth....A thousand Christs sent to earth would not redeem its people unless they themselves become Christlike by purifying and expanding their individual consciousness to receive therein the second coming of the Christ Consciousness, as was manifested in Jesus....Contact with this Consciousness, experienced in the ever new joy of meditation, will be the real second coming of Christ—and it will take place right in the devotee’s own consciousness.

The “Only Begotten Son”: Christ Consciousness

There is a distinguishing difference of meaning between Jesus and Christ. His given name was Jesus; his honorific title was “Christ.” In his little human body called Jesus was born the vast Christ Consciousness, the omniscient Intelligence of God omnipresent in every part and particle of creation. This Consciousness is the “only begotten Son of God,” so designated because it is the sole perfect reflection in creation of the Transcendental Absolute, Spirit or God the Father.

It was of that Infinite Consciousness, replete with the love and bliss of God, that Saint John spoke when he said: “As many as received him [the Christ Consciousness], to them gave he power to become the sons of God.” ...

By the definite science of meditation known for millenniums to the yogis and sages of India, and to Jesus, any seeker of God can enlarge the caliber of his consciousness to omniscience—to receive within himself the Universal Intelligence of God.

And the disciples came, and said unto him, “Why speakest thou unto them in parables?” He answered and said unto them, “Because it is given unto you to know the mysteries of the kingdom of heaven, but to them it is not given....Therefore speak I to them in parables: because they seeing see not; and hearing they hear not, neither do they understand.”

When Jesus was asked by his disciples why he taught the people in the subtle illustrations of parables, he answered, “Because it is so ordained that you who are my real disciples, living a spiritualized life and disciplining your actions according to my teachings, deserve by virtue of your inner awakening in your meditations to understand the truth of the arcane mysteries of heaven and how to attain the kingdom of God, Cosmic Consciousness hidden behind the vibratory creation of cosmic delusion. But ordinary people, unprepared in their receptivity, are not able either to comprehend or to practice the deeper wisdom-truths. From parables, they glean according to their understanding simpler truths from the wisdom I send out to them. By practical application of what they are able to receive, they make some progress toward redemption.”...

How do the receptive perceive truth, whereas the unreceptive “seeing see not; and hearing they hear not, neither do they understand”? The ultimate truths of heaven and the kingdom of God, the reality that lies behind sensory perception and beyond the cogitations of the rationalizing mind, can only be grasped by intuition—awakening the intuitive knowing, the pure comprehension, of the soul.

Christ has been much misinterpreted by the world. Even the most elementary principles of his teachings have been desecrated, and their esoteric depths have been forgotten. They have been crucified at the hands of dogma, prejudice, and cramped understanding. Genocidal wars have been fought, people have been burned as witches and heretics, on the presumed authority of man-made doctrines of Christianity. How to salvage the immortal teachings from the hands of ignorance? We must know Jesus as an Oriental Christ, a supreme yogi who manifested full mastery of the universal science of God-union, and thus could speak and act as a savior with the voice and authority of God. He has been Westernized too much. 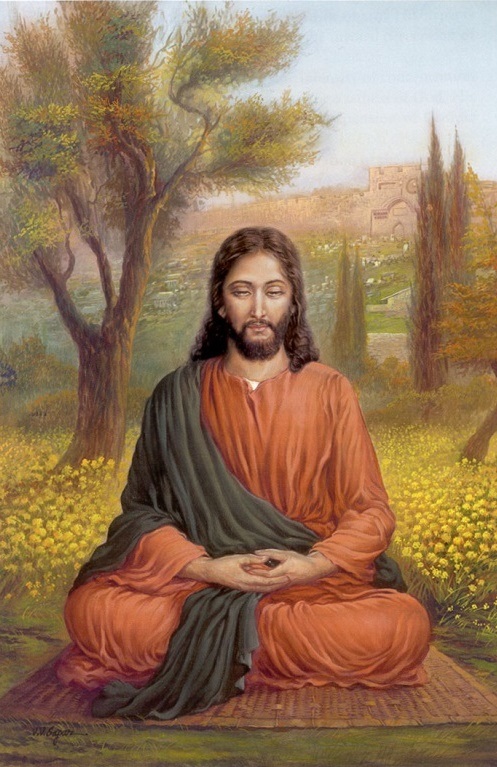 Exoteric reading of scripture engulfs in dogma the universality of religion. A panorama of unity unfolds in an understanding of esoteric truth....Divine incarnations do not come to bring a new or exclusive religion, but to restore the One Religion of God-realization.

Many are the churches and temples founded in his name, often prosperous and powerful, but where is the communion that he stressed—actual contact with God? Jesus wants temples to be established in human souls, first and foremost; then established outwardly in physical places of worship. Instead, there are countless huge edifices with vast congregations being indoctrinated in churchianity, but few souls who are really in touch with Christ through deep prayer and meditation.

Rediscovering the Heart of Jesus’ Message

The lack of individual prayer and communion with God has divorced modern Christians and Christian sects from Jesus’ teaching of the real perception of God, as is true also of all religious paths inaugurated by God-sent prophets whose followers drift into byways of dogma and ritual rather than actual God-communion. Those paths that have no esoteric soul-lifting training busy themselves with dogma and building walls to exclude people with different ideas. Divine persons who really perceive God include everybody within the path of their love, not in the concept of an eclectic congregation but in respectful divine friendship toward all true lovers of God and the saints of all religions.

The Good Shepherd of souls opened his arms to all, rejecting none, and with universal love coaxed the world to follow him on the path to liberation through the example of his spirit of sacrifice, renunciation, forgiveness, love for friend and enemy alike, and supreme love for God above all else. As the tiny babe in the manger at Bethlehem, and as the savior who healed the sick and raised the dead and applied the salve of love on the wounds of errors, the Christ in Jesus lived among men as one of them that they too might learn to live like gods.

The Indescribable Love of God

“If ye abide in me, and my words abide in you, ye shall ask what ye will, and it shall be done unto you....

“As the Father hath loved me, so have I loved you: continue ye in my love. If ye keep my commandments, ye shall abide in my love; even as I have kept my Father’s commandments, and abide in His love. These things have I spoken unto you, that my joy might remain in you, and that your joy might be full.”

Jesus promised his disciples that “if ye abide in me, and my words abide in you”—if their consciousness were perfectly in tune with the Christ Consciousness and Its emanations of Cosmic Vibration—they would be able to demonstrate untold wonders through operating the universal creative principle....

Then Jesus spoke to them precious words, none dearer to the devotee’s heart, that he loved them with the same divine, impartial, undying love with which the Heavenly Father loved him....Try to imagine the love spoken of by Jesus in these verses....

To feel that soul-love of all pure hearts is to be transported in an ecstasy of joy so great, so overwhelming, that it cannot be contained—a charge of bliss passing through one’s being, a thousand million volts of rapturous power. This divine emotion is beyond description — a communion of unutterable sweetness with the Infinite Grace, the Indescribable Glory, the Eternal Protection. That is the love of God which Jesus felt, and in which he sheltered his disciples: “As the Father hath loved me, so have I loved you: continue ye in my love.”

The Gospel preserves a record of Jesus’ words on this holy occasion; but readers should realize—and try to feel within themselves as though they, too, were present—that behind those words was the tangible vibratory presence of God. During times of divine fellowship (satsanga) such as Jesus’ Last Supper with his disciples, those who are receptive feel transported into a higher consciousness of God-perception pouring into their hearts and minds as the master speaks. This attunement imbues the devotee’s consciousness, in the highest way, whenever he summons the guru’s grace in the inner temple of deep, worshipful meditation.

The Resurrection of Jesus, and His Ever-Living Presence

Resurrection has been well understood by accomplished yogis of India since the dawn of the highest ages. Jesus himself was a realized yogi: one who knew and had mastered the spiritual science of life and death, God-communion and God-union, one who knew the method of liberation from delusion into the kingdom of God. Jesus showed throughout his life and death his power of complete mastery over his body and mind and the oft-recalcitrant forces of nature. We understand resurrection in its true sense when we comprehend the yoga science that clearly defines the underlying principles by which Jesus resurrected his crucified body into the freedom and light of God....

No other science has detailed the descent of the individualized consciousness of God as the soul into man and its evolutionary and spiritual ascent back into Spirit. In this modern age, Kriya Yoga has been brought forward after being lost in the dark ages, as a definite method to hasten the spiritual evolution of human consciousness and open the inner cerebrospinal pathway of ascension, releasing the soul through the spiritual eye into the kingdom of the Holy Ghost, the Christ Consciousness, and the Cosmic Consciousness of God the Father.

The Kingdom of God Within You

There is a beautiful accord between the teachings of Jesus Christ to enter the “kingdom of God within you” and the teachings of Yoga set forth by Lord Krishna in the Bhagavad Gita to restore King Soul, the reflection of God in man, to its rightful rulership of the bodily kingdom, with full realization of the soul’s godly states of consciousness. When man is settled in that inner kingdom of divine consciousness, the awakened intuitive perception of the soul pierces the veils of matter, life energy, and consciousness and uncovers the God-essence in the heart of all things….

Raja Yoga, the royal way of God-union, is the science of actual realization of the kingdom of God that lies within oneself. Through practice of the sacred yoga techniques of interiorization received during initiation from a true guru, one can find that kingdom by awakening the astral and causal centers of life force and consciousness in the spine and brain that are the gateways into the heavenly regions of transcendent consciousness. One who achieves such awakening knows the omnipresent God in His Infinite Nature, and in the purity of one’s soul, and even in the delusive cloaks of changeable material forms and forces.

Jesus went very deep in teachings that appear on the surface to be simple—much deeper than most people understand…. [In his teachings] is the whole science of yoga, the transcendental way of divine union through meditation.

Read next: The Hidden Truths in the Bhagavad Gita