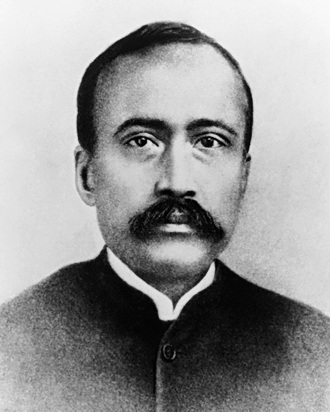 Paramahansa Yogananda often spoke reverently of his father, Sri Bhagabati Charan Ghosh, as an advanced Kriya Yogi who also provided critical financial help when Paramahansaji left India in 1920 to begin his spiritual mission in America. Now, Bhagabati Charan Ghosh’s life and generosity have been honored yet again, this time by a financial institution he founded more than a century ago.

On October 19, 2020, the S.E., S.E.C & E. Co. Railways Employees’ Co-operative Credit Society dedicated a bronze bust of Bhagabati Charan Ghosh in a ceremony at the Society’s headquarters in the Garden Reach area of Kolkata. The commemorative statue recognized Sri Ghosh’s dedication to the welfare of railway workers, who for over a century have received access to low-interest credit through the organization he founded (originally under the name “Calcutta Urban Bank”) in 1909. At the time Sri Ghosh was employed in a senior position in the Bengal-Nagpur Railway (now South Eastern Railway).

At the dedication event, Sri Somnath Ghosh, the great-grandson of Bhagabati Charan Ghosh, along with his wife Smt. Sarita Ghosh, unveiled the statue, and then spoke about the life of his great-grandfather. Then Swami Achyutananda Giri of Yogoda Satsanga Society of India (Paramahansaji’s work in India, also known as YSS) thanked the society for acknowledging Bhagabati Ghosh’s humanitarian work in establishing the bank, and quoted Paramahansa Yogananda’s own recognition of his father’s contribution in Autobiography of a Yogi:

“Father was not interested in the accumulation of money for the sake of power. On one occasion, after he had organized the Calcutta Urban Bank, he refused to benefit himself by holding any of its shares. He had simply wished to perform a civic duty in his spare time.”

Drawing a parallel between father and son, Swami Achyutananda also observed: “We notice a great similarity between the growth of the Railways Employees Cooperative Credit Society from humble beginnings and the growth of Yogoda Satsanga Society of India, founded by his son Paramahansa Yogananda.” Both are institutions dedicated to providing service, he said.

Many details of Bhagabati Charan Ghosh’s inspiring life are recounted in Autobiography of a Yogi as well as in Mejda, a biography of Paramahansaji written by his brother Sananda Lal Ghosh. A direct disciple of Lahiri Mahasaya, Bhagabati Ghosh exercised a loving spiritual influence on his eight children. And his financial contributions were key not only to Paramahansaji’s international mission but also to the permanent establishment of the YSS ashram in Ranchi during Paramahansaji’s return trip to India in 1935.

Despite the fact that Bhagabati Charan Ghosh suffered severe financial difficulties as a youth and worked diligently to ultimately attain material prosperity in later life, he prioritized spirituality over financial gain. In Autobiography of a Yogi Paramahansaji recorded one of his father’s characteristic remarks:

Why be elated by material profit? The one who pursues a goal of evenmindedness is neither jubilant with gain nor depressed by loss. He knows that man arrives penniless in this world, and departs without a single rupee.

YSS monks Swami Achyutananda and Brahmachari Ameyananda flank a newly unveiled bust of Sri Bhagabati Charan Ghosh during a ceremony at the headquarters of the S.E., S.E.C & E. Co. Railways Employees’ Co-operative Credit Society in the Garden Reach area of Kolkata. Just behind Swami Achyutananda stands Sri Somnath Ghosh, the great-grandson of Bhagabati Charan Ghosh. He and his wife, Smt. Sarita Ghosh (second from left), formally unveiled the statue, accompanied by traditional Vedic chanting and ceremonial garlanding of the bust. The members of the Board of the Society were also in attendance.