Over the past several months, numerous media outlets from around the globe have published inspiring articles about Paramahansa Yogananda and his Self-Realization Fellowship teachings—yet another sign that his influence on world spirituality continues to grow.

Over 150 print publications and websites noted the milestone of Paramahansa Yoganananda’s 125th birth anniversary, which occurred on January 5, 2018. The December 2017 issue of Siliconeermagazine (a monthly print and online general-interest periodical with a large distribution among the south Asian community in the the United States) published a six-page feature with photographs in anticipation of this historic event.

In the wake of the December 2017 release of the German-language edition of The Second Coming of Christ, Volume II, many popular spirituality and yoga magazines in Germany have featured (or will soon feature) book reviews, previews, and excerpts from Paramahansa Yogananda’s lauded interpretation of the four Gospels (originally published in English in 2004). These include: 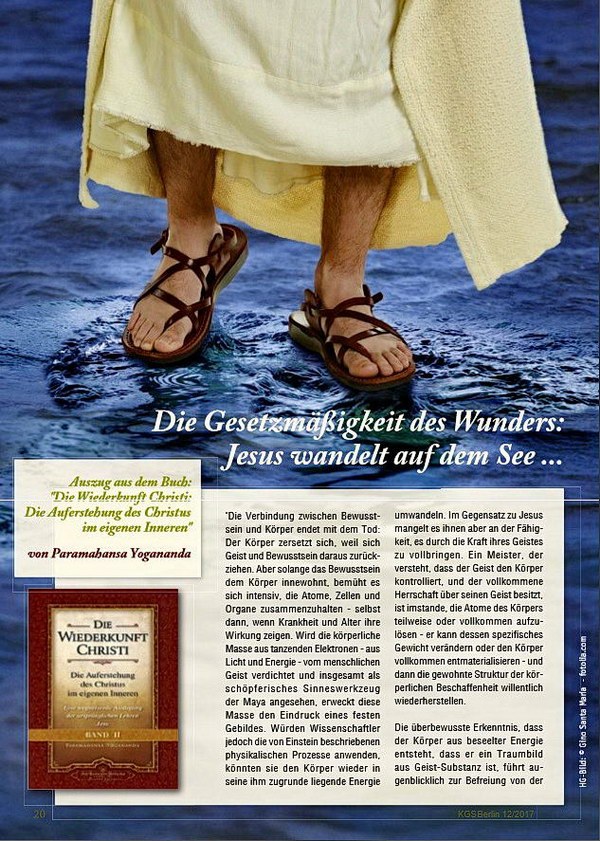 The recently released book Visiting the Saints of India With Sri Daya Mata by Sri Mrinalini Mata was highlighted in the fall 2017 issue of Evolve! magazine, which reprinted an excerpt from the book. Evolve! magazine features reviews of inspiring books and other products related to body, mind, and spirit.

In Visiting the Saints of India With Sri Daya Mata, Sri Mrinalini Mata recounts her profound experiences during her first trip to India in 1961. This pilgrimage to the homeland of her guru, Paramahansa Yogananda, enhanced by her deep attunement with him, also afforded her the opportunity for fascinating encounters with other revered Indian saints. As a constant companion of Sri Daya Mata, she also describes the exalted spiritual stature of Paramahansaji’s second spiritual successor. 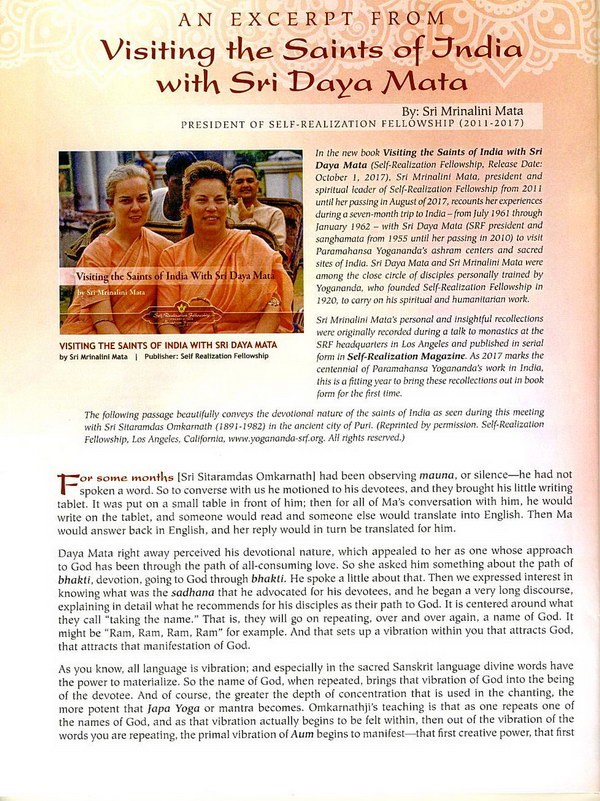 The September 2017 issue of the Spanish-language magazine Espacio Humano featured an excerpt from “The Divine Art of Making Friends,” which appears in Man’s Eternal Quest, the first volume in Paramahansa Yogananda’s Collected Talks and Essays. The excerpt describes friendship as “the noblest human expression of God’s desire to show His love to man.”

The November issue of Espacio Humano featured another of Paramahansaji’s articles, “The Spectrum of Spiritual Consciousness” from The Divine Romance, Volume II of his collected talks and essays series. 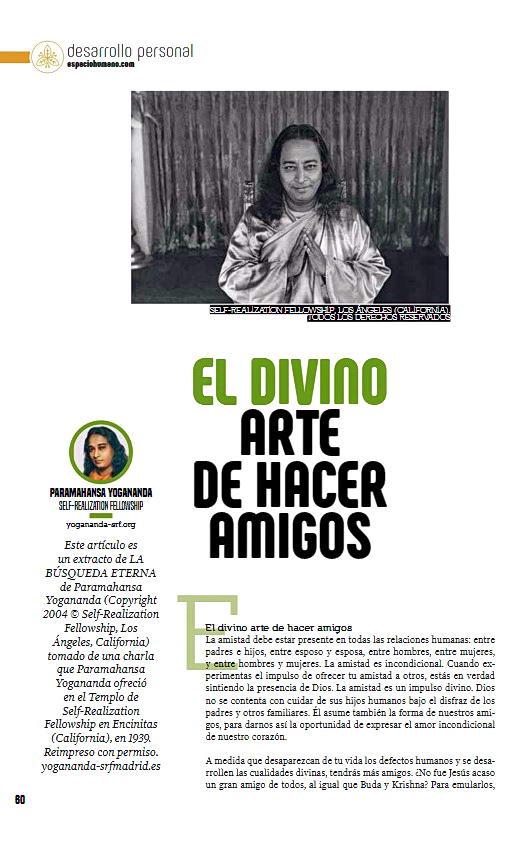 The September 2017 issue of the Spanish-language magazine Universo Holistico featured an excerpt from The Divine Romance, from the talk “How to Find a Way to Victory,” in which Yogananda explains that although “science will again and again make new conquests” in addressing the world’s problems, “only spiritual science can teach us the way to complete victory” over all the troubles of life. 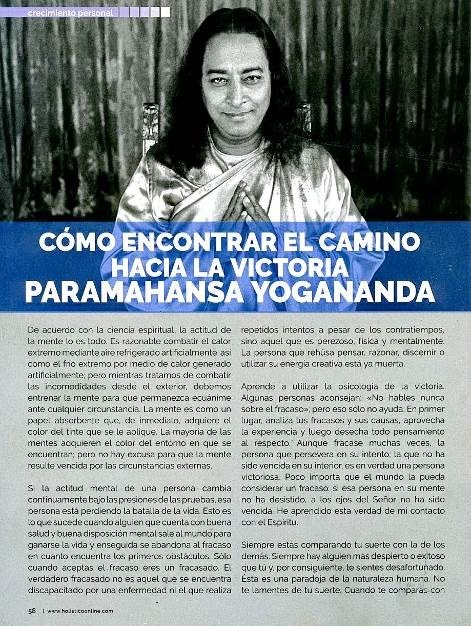 Longtime SRF monk and minister Brother Pranavananda discussed finding life’s purpose in an in-depth interview in the October 2017 issue of the Portuguese-language magazine Vidas Simples. Brother Pranavananda also touched on the topics of meditation, death, tolerance, and perseverance during adversity. 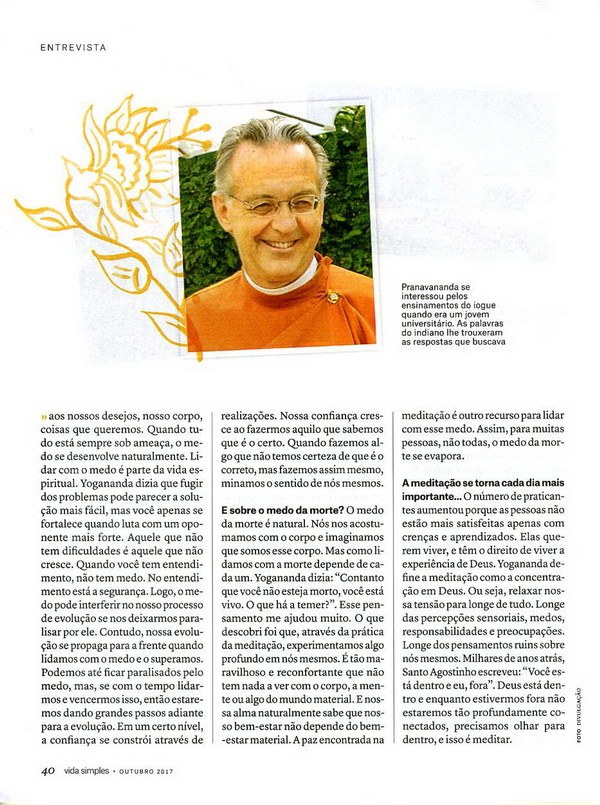 In the July 2017 issue of Yoga Magazine, distributed in the U.K. and the U.S., Sister Usha offered readers practical guidance for how to face head-on the challenges of everyday life. “Practice the presence of peace,” she counsels, quoting Paramahansaji’s words. “The more you do that, the more you will feel the presence of that power in your life.” 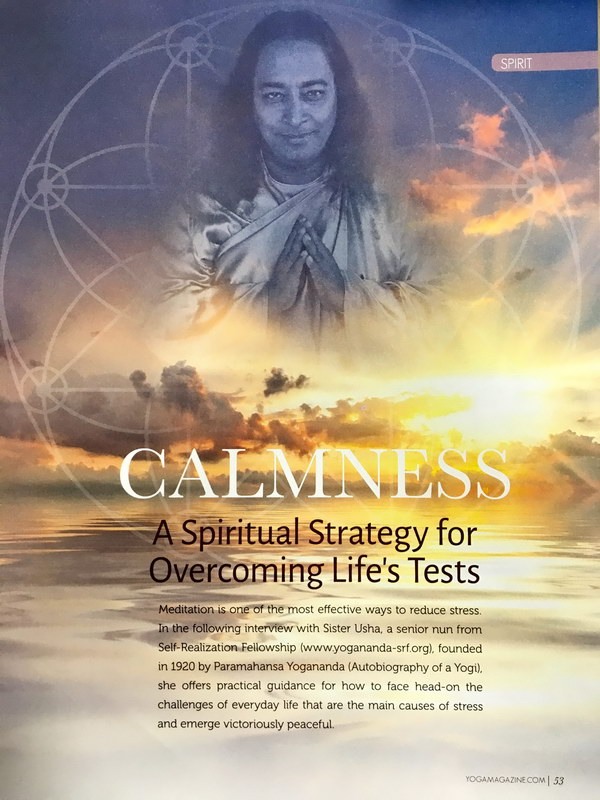 On July 28, 2017, World Religion News posted an excerpt of an article entitled “What Is Meditation?” by Brother Nakulananda, a senior monk and minister of SRF. In it he explores Paramahansaji’s views on the divine purpose of life and how meditation, especially the science of Kriya Yoga, can bring truth-seekers into harmony with that purpose. 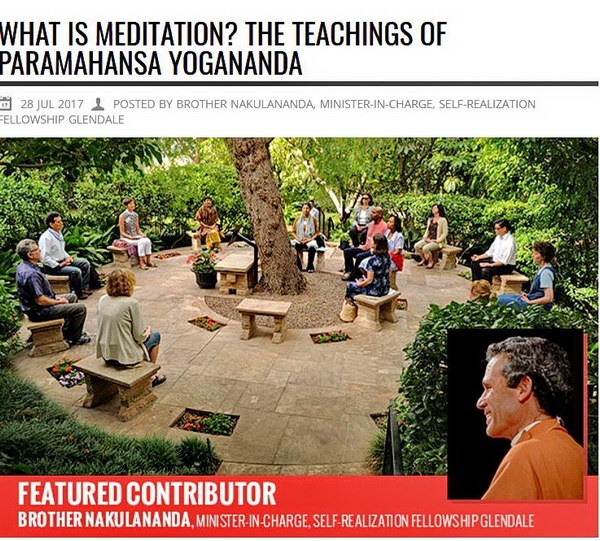 The July 2017 issue of Lebensträume—a popular body-mind-spirit magazine distributed throughout Germany—features an article by Brother Satyananda that first appeared in Selbst-Verwirklichung (the German edition of Self-Realization magazine). In this three-page feature entitled “Deepening Your Meditations Through Inner Renunciation,” Brother Satyananda affirms: “By inner renunciation during meditation, gradually you learn to go so deep that nothing ruffles or disturbs you.” 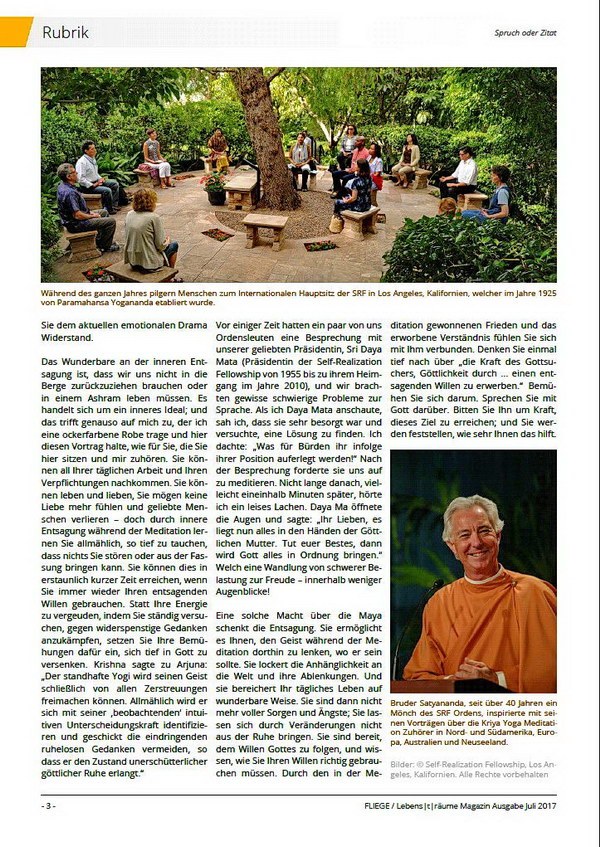