Inspiration from the September Newsletter 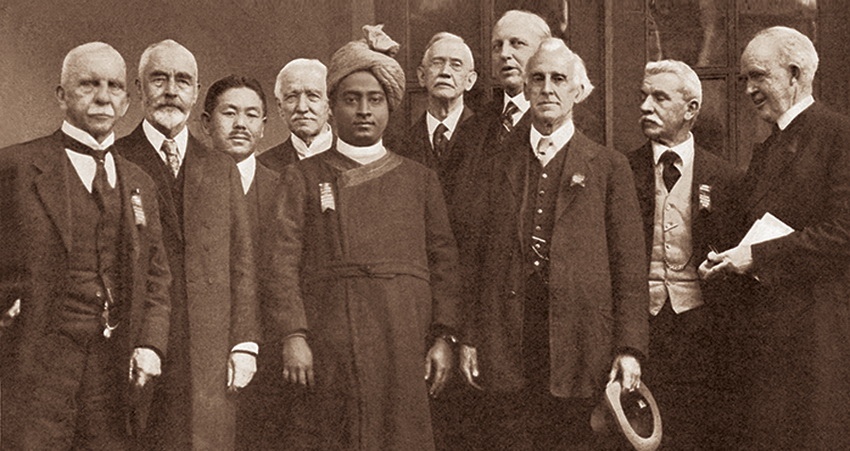 This month we celebrate the 100th anniversary of Paramahansa Yogananda's momentous arrival in America on September 19, 1920.

Shortly after arriving, Yogananda began the organization that he later named Self-Realization Fellowship. Founded for the purpose of disseminating the science of Kriya Yoga that he brought from India, SRF grew, within the Guru’s lifetime, to have a worldwide membership. Since his passing in 1952, Yogananda’s teachings have continued to expand their influence, embraced by an ever-increasing global following.

In honor of Yogananda’s historic landing in Boston one hundred years ago, we look back to his very first speech in the United States, “The Science of Religion.” Speaking to a congress of religious leaders from around the world only a little more than two weeks after his arrival, Yogananda compellingly presented the universal spirituality of India — timeless yet timely ideals that were new to many Westerners yet ideally suited for the modern scientific age.

Yogananda affirmed that true religion is not dogmatic but universal and can be grounded in the concept of God as Bliss. He spoke of the faculty of intuition, by which God can actually be experienced, not merely reasoned about. Greatest of all, he told his audience that there was a practical method for awakening one’s latent intuitive powers of God-perception. That method consists of techniques for consciously controlling the life force — techniques that comprise the Kriya Yoga science in which he initiated some 100,000 people during his lifetime. Its spread continues today through his SRF Lessons.

Following is a short selection of excerpts from The Science of Religion, an elaboration of Yogananda’s landmark speech in book form, which SRF first published in the 1920s and which has just been released in a special SRF Centennial edition.

What we conceive of God should be of daily, nay hourly, guidance to us. The very conception of God should stir us to seek Him in the midst of our daily lives.

If God is not conceived in such a way that we cannot do without Him in the satisfaction of a want, in our dealings with people, in earning money, in reading a book, in passing an examination, in the doing of the most trifling or the highest duties, then it is plain that we have not felt any connection between God and life.

We can know God only by knowing ourselves, for our real nature is similar to His. Man has been created in the image of God. If the methods here suggested are learned and earnestly practiced, you will know yourself to be a blissful spirit and will realize God.

Since its first publication, this book has been introducing readers to the profound understanding that Yogananda brought to the West from India — a concept that is ancient yet entirely suited for our modern age — that the purpose of life is to permanently remove suffering and to know oneself as Spirit, “the fountainhead of Bliss.” In clear, simple language, Yogananda describes how Yoga — India’s universal science of the soul — can lead anyone to experience that Bliss for themselves.