Brother Chidananda, president and spiritual head of Self-Realization Fellowship/Yogoda Satsanga Society of India, delivered this year’s keynote lecture at the Mahatma Gandhi Memorial Lecture and Awards Ceremony, sponsored by the San Diego Indian American Society. This event took place on Saturday, August 17, in the Atkinson Auditorium at the University of California, San Diego. So great was the interest that an overflow room had to be quickly set up just prior to the start of the event, in order to accommodate the many attendees who could not find space in the main auditorium. 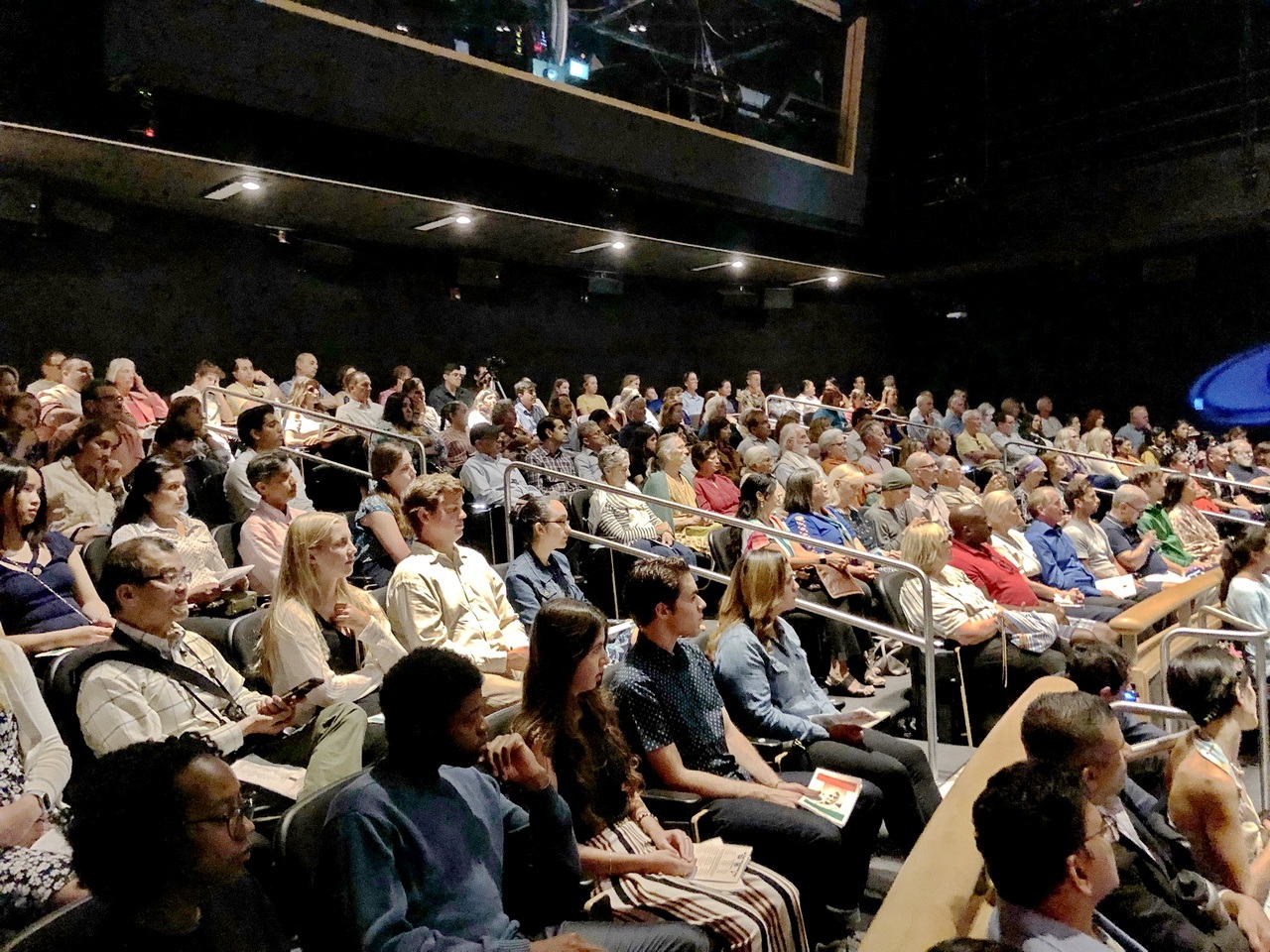 Professor M. C. Madhavan, Professor Emeritus of Economics and Asian Studies at San Diego State University and founder of the San Diego Indian American Society, presided at the function. Brother Chidananda was introduced by Dr. Ramesh Rao, distinguished director of the California Institute for Telecommunications and Information Technology at UCSD.

During his lecture Brother Chidananda discussed the special relationship between Paramahansa Yogananda and Mahatma Gandhi and their mutual interest in bringing greater peace to the world. Paramahansaji established a Mahatma Gandhi World Peace Memorial, which contains a portion of Gandhi’s ashes, when he dedicated the SRF Lake Shrine in Pacific Palisades, California, in 1950.

Brother Chidananda said, “This year is the 150th anniversary of the birth of Mahatma Gandhi, and I was deeply touched and grateful, and also impressed, that the San Diego Indian American Society chose — for the Gandhi Memorial Lecture in this special anniversary year — not a representative of government, not a scholar, not a political leader, but a devotee of yoga. That is very significant, as we will see if we ask ourselves, ‘What was the source of Gandhiji’s accomplishment?’”

He continued: “The greatest evidence from his own life, from his own words, from the remarkably consistent pattern of his behavior throughout decades of public life, is that his ability to achieve what he achieved came from his deep-rootedness in the perennial, universal spirituality that India has stewarded for countless millennia. In short, in addition to all the other remarkable qualities he had — his political shrewdness, his great ability to motivate and inspire and persuade people, his unfailing sense of humor — in essence his accomplishments can all be crystallized into this one fact: Gandhiji was a yogi.

“Yoga is not, essentially, physical exercise. I think most people are beginning to understand that. Yoga means union: of the body and mind with the soul; and the soul with the all-pervading Universal Consciousness, or Spirit. Yoga is the state of union, and also the methods for achieving that state.

“Why is this concept of ‘Gandhi as yogi’ important to dwell on? Because it takes the inspiration and power of his life and accomplishments out of the category of unrepeatable uniqueness, and puts it in the realm of practices that each of us can employ.

“My own spiritual teacher, Paramahansa Yogananda (author of Autobiography of a Yogi), was among the first to endorse and speak about Gandhi in large public venues in the United States. As far back as 1923, shortly after Yogananda came to the U.S. to spread the yoga science of meditation, he was telling audiences all over the country about the profound spiritual movement that Gandhi was creating.

“Gandhi’s movement was actually grounded in two of the ancient foundational moral principles of yoga — ahimsa (nonviolence) and satya (truth). In that sense Gandhi put yoga philosophy to work on an unprecedented scale, and by doing so, literally changed the history of the modern world.”

Brother Chidananda went on to outline how the spiritual example of Mahatma Gandhi can be a source of tremendous inspiration and guidance for the young people receiving the memorial scholarships at this event — as well as for humanity at large in these turbulent times. His address was received with interest and deep attention by the hundreds who attended.

An Illustrious Legacy of Past Speakers 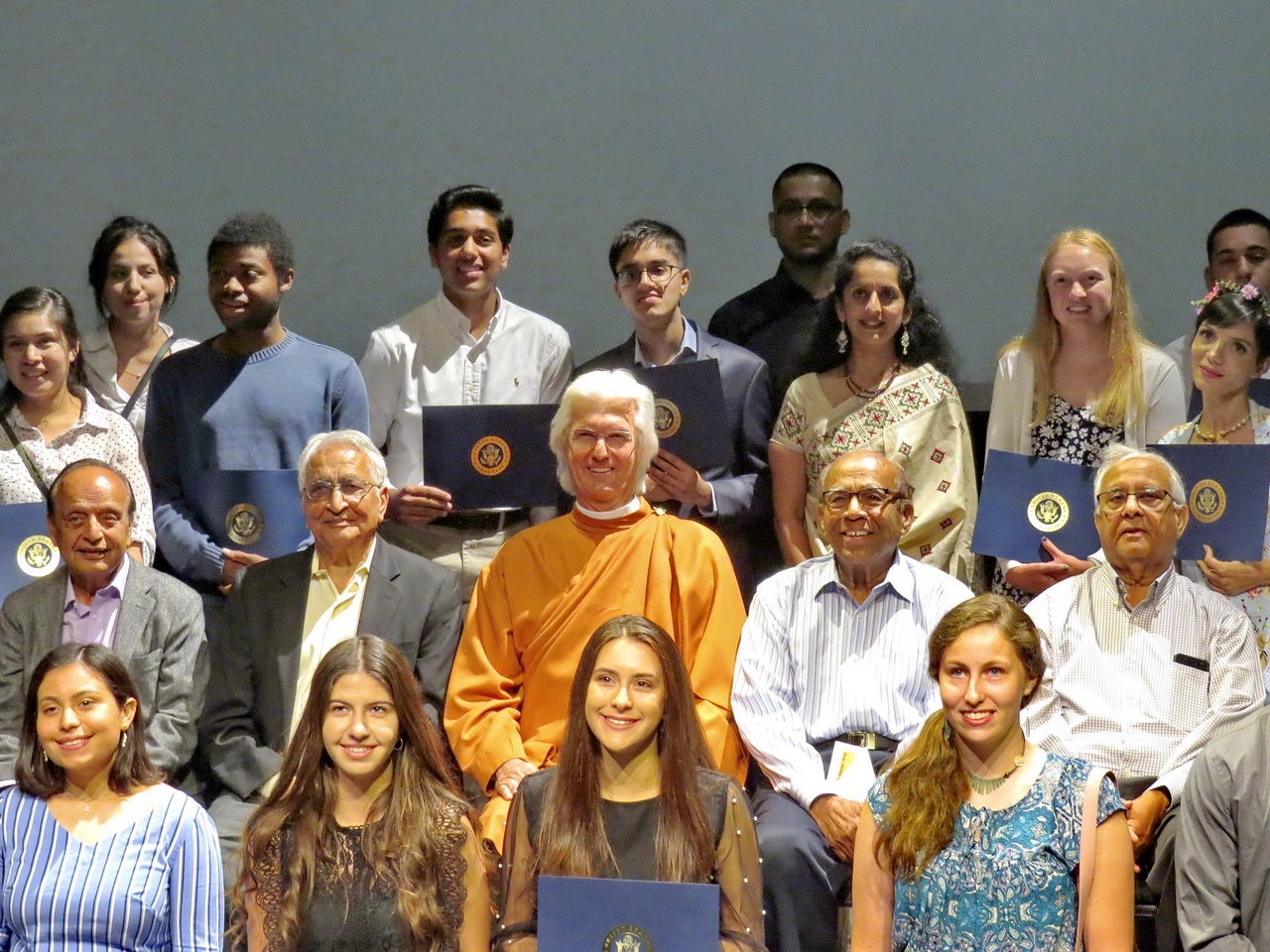 This year, more than 50 high school graduates and community college students in the San Diego area will receive educational grants from the SDIAS totaling $110,000. Nearly 90 percent of the grants will go to students from families with no college education. In addition to grants for college, recipients also receive U.S. Congressional certificates, which were presented to each honoree individually by Brother Chidananda on behalf of SDIAS.