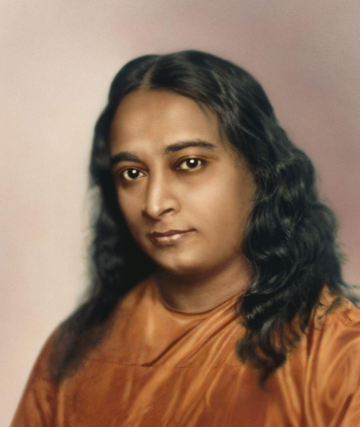 Paramahansa Yogananda, author of the modern spiritual classic Autobiography of a Yogi and widely revered as one of the preeminent spiritual figures of our time, contributed in far-reaching ways to a greater awareness and appreciation in the West of the spiritual wisdom of the East.  Regarded as the father of Yoga in the West, Yogananda made an indelible impression on the spiritual landscape of the United States and the world.

Paramahansa Yogananda’s arrival in America from India in 1920, when he was invited to serve as a delegate to the International Congress of Religious Liberals convening in Boston, marked the beginning of an upsurge in the West of interest in the spiritual wisdom of the East. That same year he founded Self-Realization Fellowship to disseminate worldwide his teachings on India's ancient philosophy of Yoga and its time-honored science of meditation.

In 1925, he took up residence in Los Angeles where he established an international headquarters for his society. Over the next decade he traveled and lectured extensively, speaking to capacity audiences in major cities throughout North America and Europe. To the tens of thousands of Westerners who attended his lectures, his discourses on the unity of “the original teachings of Jesus Christ and the original Yoga taught by Bhagavan Krishna” were a revelation.

During his 32 years of public ministry in America and abroad, Yogananda devoted himself to fostering greater harmony and cooperation among all religions, races, and nationalities; and to helping people realize and express more fully in their lives the beauty, nobility, and divinity of the human spirit. He brought a knowledge of Yoga and meditation to millions of men and women, not only through his public lectures and classes, but also through his writings and the centers he established in countries around the world.

Many prominent figures in science, business, and the arts became his students, including horticulturist Luther Burbank, operatic soprano Amelita Galli-Curci, George Eastman (inventor of the Kodak camera), poet Edwin Markham, and symphony conductor Leopold Stokowski. In 1927, Yogananda was officially received at the White House by President Calvin Coolidge, who had become interested in the newspaper accounts of his activities.

Paramahansa Yogananda was born Mukunda Lal Ghosh on January 5, 1893, in Gorakhpur, India, into a prosperous and devout Bengali family. From his earliest years it was evident to those around him that his awareness and experience of the spiritual was far beyond the ordinary. As a youth he sought out many of India's saints and philosophers, hoping to find an illumined teacher to guide him in his spiritual quest.

In 1910, at the age of 17, he met the revered Indian sage Swami Sri Yukteswar, in whose hermitage he spent the better part of the next ten years. After graduating from Calcutta University in 1915, he became a monk of India's venerable monastic Swami Order, at which time he received the name Yogananda (signifying bliss, ananda, through divine union, yoga).

Yogananda began his life's work with the founding, in 1917, of a “How-to-Live” school, where modern educational methods were combined with yoga training and instruction in spiritual ideals. Visiting the school in 1925, Mahatma Gandhi wrote: “This institution has greatly impressed my mind.”

Gandhi and Yogananda met a decade afterwards when the latter made a return visit to India in 1935–36, after first touring parts of Europe and the Middle East. At the Mahatma's request, Yogananda instructed him and several of his followers in the spiritual science of Kriya Yoga.

During the 1930s, Yogananda began to withdraw somewhat from extensive public lecturing in order to devote himself more to his writings, to establishing Self-Realization Fellowship temples and meditation centers, and to building a firm foundation for the future of his spiritual and humanitarian work. Under his direction, the personal guidance and instruction that he had given to students of his classes was arranged into a comprehensive series of lessons for home study.

Autobiography of a Yogi, Yogananda's life story, was published in 1946 and expanded by him in subsequent editions. Recognized from the beginning as a landmark work in its field, the book has been in print continuously since its initial publication more than fifty years ago. Honored as one of the 100 best spiritual books of the 20th century, it remains one of the most important, and most readable, works on Yoga and Eastern spiritual thought.

Paramahansa Yogananda passed away on March 7, 1952, in Los Angeles, following his delivery of a speech at a banquet honoring Dr. Binay R. Sen, India's Ambassador to the United States.  His passing received widespread coverage in the press, including in The New York Times, the Los Angeles Times, and Time magazine.

In 2017, the Government of India issued a stamp in honor of the 100th anniversary of Paramahansa Yogananda’s nonprofit, spiritual organization in India, Yogoda Satsanga Society.

In 1977, on the occasion of the twenty-fifth anniversary of Paramahansa Yogananda's passing, the Government of India formally recognized his outstanding contributions to the spiritual upliftment of humanity, by issuing a commemorative stamp in his honor. In March of 2017, a 2nd commemorative stamp was issued by the Indian Government, citing the outstanding spiritual achievements of Yogoda Satsanga Society on its centenary. India Prime Minister Narendra Modi stated during the official postal stamp release function on March 7, 2017 at the Vigyan Bhavan in New Delhi: “Looking at [Paramahansa Yogananda’s] life, it is evident that he does not merely stress the ways to outer freedom, but focuses on the inner journey….Removing rigid dogma, he made spirituality so approachable and tangible that in these hundred years since he started it, his work has become a world-wide movement, a perennial resource of spiritual understanding.”

Yogananda’s long-awaited interpretation of the four Gospels – The Second Coming of Christ – a profoundly enriching journey into the deeper meaning of Jesus’ universal teachings, was released in September 2004.

Among Yogananda's other writings are acclaimed interpretations of the Bhagavad Gita (God Talks With Arjuna) and the Rubaiyat of Omar Khayyam (Wine of the Mystic: A Spiritual Interpretation), a three-volume anthology series (Collected Talks and Essays on Realizing God in Daily Life), two collections of poetry and prayer, and numerous volumes of spiritual counsel.  Self-Realization Fellowship also publishes a series of rare recorded talks given by the great guru during the latter years of his life.

The award-winning documentary feature film, Awake: The Life of Yogananda, premiered in the U.S. and Canada in the fall of 2014 and has now been distributed worldwide. For more information about the teachings of Paramahansa Yogananda and Self Realization Fellowship, please visit https://yogananda.org.