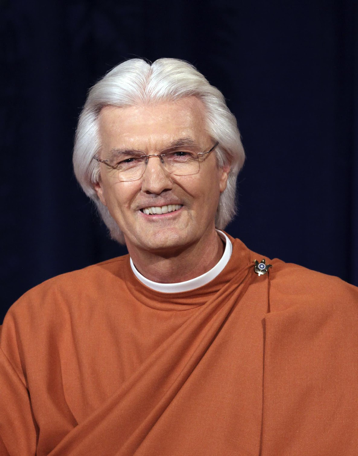 Brother Chidananda is the president and spiritual head of Self-Realization Fellowship/ Yogoda Satsanga Society of India (SRF/YSS), the worldwide spiritual organization established by Paramahansa Yogananda in 1920. He is responsible for the overall guidance of the society’s monastic order; the operations of its more than 800 temples, meditation centers, and retreats around the world; its publications division; and the many spiritual and humanitarian activities and services the society implements each year. He also holds the responsibility of editor-in-chief of SRF Publications.

Born Christopher Bagley in Annapolis, Maryland in 1953, Brother Chidananda, whose name means “bliss (ananda) through the infinite Divine Consciousness (chit),” has been a monk of SRF for more than forty years, and a member of the SRF and YSS Boards of Directors since 2009. Prior to his election to the presidency, Brother Chidananda served as senior editor of SRF Publications, working directly with Sri Mrinalini Mata, who, in addition to being president of SRF/YSS (from 2011 until her passing in August 2017), held the position of editor-in-chief for many decades. He has also served for many years as a member of the management committee that oversees SRF’s myriad activities and operations under the guidance of the society’s president.

Brother Chidananda first encountered the teachings of Paramahansa Yogananda in Encinitas in the early 1970s when he was a student of sociology and philosophy at the University of California, San Diego. Drawn by a long-felt interest in India’s spirituality, Brother Chidananda visited the SRF Ashram Center in Encinitas, just north of the university campus, which was a familiar landmark for many of the students living in the adjacent coastal communities.

Some months later, he happened upon a copy of Autobiography of a Yogi. He was instantly captivated by it and, during his last year at the university, enrolled for the Self-Realization Fellowship Lessons and began attending SRF services in Encinitas. It was not long thereafter that he realized the deep desire to devote his life completely to seeking God and serving the work of Paramahansa Yogananda as a monastic disciple.

On November 19, 1977, following completion of his university studies, Brother Chidananda entered the monks’ postulant ashram of SRF in Encinitas. After a year-and-a-half of initial monastic training, he was transferred to the SRF International Headquarters in Los Angeles, where he was immediately assigned to editorial work in the Publications Department, serving under Mrinalini Mata, one of Paramahansa Yogananda’s foremost disciples who had been personally trained by him to guide the work of his society and to edit his writings and talks for future publication after his passing.

Later, Brother Chidananda was appointed to the SRF/YSS International Publications Council, serving with Sri Daya Mata (who was president of SRF/YSS from 1955 until her passing in 2010) and Sri Mrinalini Mata. He assisted these two senior direct disciples with the preparation and publication of many works, including Paramahansaji’s voluminous scriptural commentaries (God Talks With Arjuna: The Bhagavad Gita and The Second Coming of Christ: The Resurrection of the Christ Within You) as well as all other SRF publications released from 1980 to the present. After years of progressively deeper training from Daya Mata and Mrinalini Mata, he was designated by Mrinalini Mata to succeed her as editor-in-chief of SRF/YSS publications after her passing.

Brother Chidananda was given the final vows of renunciation (sannyas) in India’s ancient monastic Swami Order by Sri Daya Mata in 1997. An ordained minister of Self-Realization Fellowship, he has shared Paramahansa Yogananda’s teachings during lecture tours and retreat programs in the United States, Canada, Europe, and India — as well as at the annual SRF World Convocations in Los Angeles. A number of his talks are available in audio and video format as well as in the society’s quarterly magazine, Self-Realization.

He resides at the international headquarters of Self-Realization Fellowship at Mount Washington in Los Angeles, California.